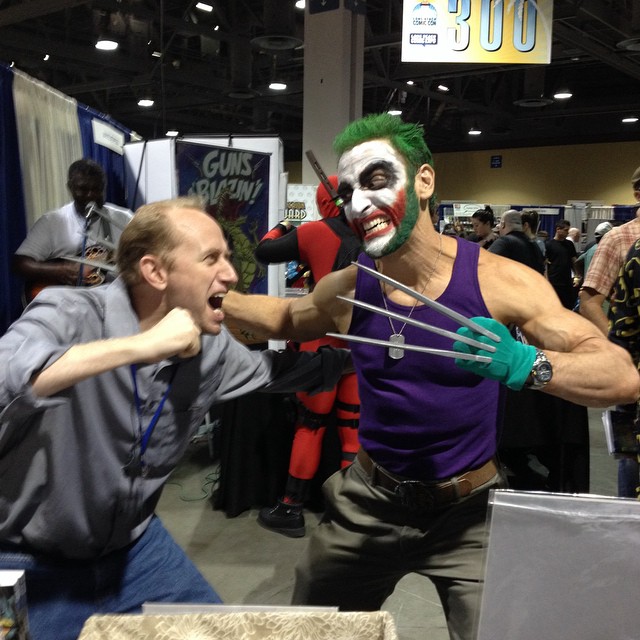 It’s been a long year of shows and I have 3 left before the year runs out. Each show is unique. Some are really well run, some are struggling with finding their identity and some are just plain greedy with the focus of “it’s all about them” (you know who you are). Each show creates a reputation that as artists and venders learn about, helps us decide whether we go back or not.  As I have said before what makes a great show is when the exhibitor/artist and the con both contribute to make it an incredible experience for the community they have their show in. They make it worth while and the attendees, when content, make the show incredible for exhibitors/artists.  Yet it really lays on the shoulders of the con itself and the exhibitors to reach out.

With that being said. Let’s talk about Long Beach. This is a show that is growing. It is figuring things out. They really try to focus on the artists, by placing artist alley in the center of the hall as well as trying to get place artist exhibitors around them and then the shops on the outskirt. They value the artist and many times I was checked up on to make sure I was doing well (much appreciated).

Yet if you are a vender and you are looking at trying to make huge amounts of money at the show, than you are at this show for the wrong reason. Exhibitors with high travel expenses and overhead might want to wait another year or two and let the show grow and develop some more. In fact this show feels more like a celebration to an audience that has never experienced a show, which is a good thing. I find that they are being introduced to an incredibly fun world of pop culture and comics.  I met a lot of people, who told me this was their first time. They said they had a good time and didn’t what to expect. They are more cautious with their funds though – as cons get bigger and bigger this is something that exhibitors need to take into account the curiosity factor of attendees, who do not know what to expect. Yet they were gracious, polite and had a great time. Which means they will most likely come back.

There are though a few things that need to be improved upon… There were a few deadzones, this happens where the layout stops flow or pushes movement in odd directions. Also it was mentioned many times about how hard it was to find people and they got lost with the numbering system. Something that many cons struggle with.

I think they need to do away with kid centered panels. I was on one and it was just 4 people (two were related to me) we still had a great time. There are many other ways to involve kids, but panels are not one of them. Phoenix has a great way of  creating kid specific areas. In fact my wife mentioned that LBCC had the right idea with their section but they just were not there yet. Most cons don’t cater to a kids section, with things to do. Phoenix in fact is one of the few shows that actually nails it on head and makes that area really wonderful. So I would suggest to have a dedicated team and volunteers to make that area fun ( a happy kid area, makes parents a lot more content which in turn translates to more interaction with exhibitors and artists).  I was though really excited to see my coloring pages put to good use, and will be happy to donate more images to this show in the future for them.

Load in and load out was smooth for us, except for the opening. There needs to be an exhibitor table with badges down by the loading area. A lot of shows do this and it makes it so much easier for exhibitors and artist checking and being able to unload. We got there early enough and I have a crew so they waited, while I took the long walk back and forth to get the badges.  By the time I got down there the back log was growing which put a strain on a lot of exhibitors when they opened the floor at 9. (I wasn’t thrilled about that either. I wish they would have waited til 9:45 or 10. The rollups were still up and it made for a very unprofessional look to those attendees that came in at 9 am while people were still trying to set up.

Honestly this show is still growing. Yet what makes them unique, compared to some shows (including the one that shall not be named) is that they are willing to listen and adjust. They are trying to make the show fun and balance out the attendee/exhibitor/con experience. I had a great time, I loved taking pictures with cosplayers (the mario/lugie guys were awesome), and getting to socialize with a several creators that I do not usually get to.

It’s a very laid back show and sometimes, laid back shows are needed. As they get the word out and maybe spend a little more on advertising to get other communities near by (buena park, huntington beach, laguna, redondo etc) interested and excited about coming to your show, I think you will have a winner. A show to be really proud of.

This is a show with promise, they just need to work out a few bugs, and build up the audience for the exhibitors more.  The show had a nice vibe to it. I want to see this show succeed. I will be back and I will do their spring show, because I enjoy the effort and the humility that the organizers bring to the table. They honestly feel like they are trying to put a good show together for both the long beach community and the creator community (who need to be a little more gracious at times as well.)  It would do some other shows good to look at their own egos and maybe focus on building a great show for their community rather than brag about numbers and how great they are. Shows become great by how they are received and what others say about them and not what they say about themselves.