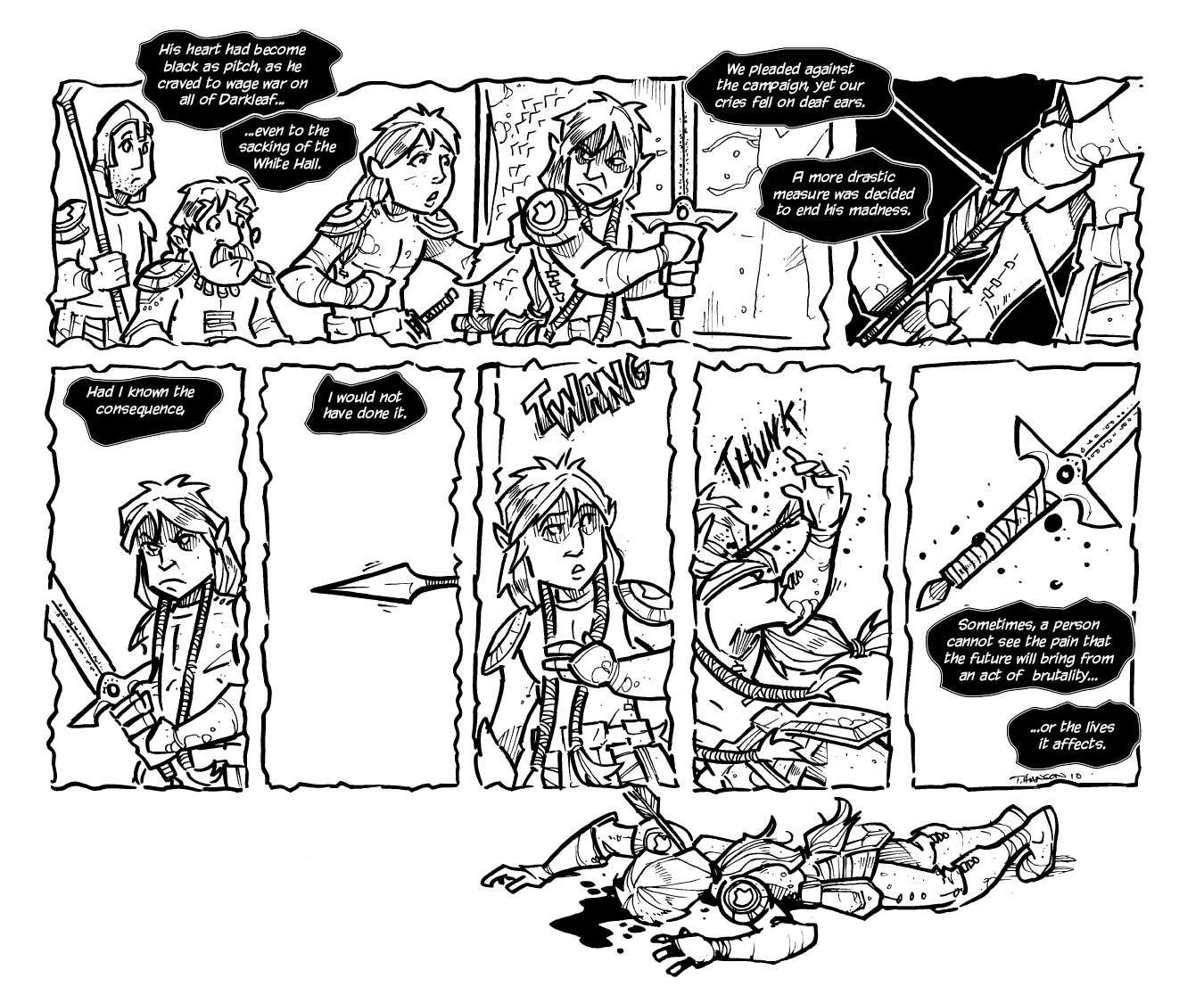 So… after his cutting up of goblins and their shoes, he somehow got too much black stuff in his bloodstream and it clogged up his heart (he'd probably been eating unhealthily and breathing a lot of smoke)… so they had to euthanise him because the painful palpatations were making him cranky… amirite? =D

So to end violence that kill the war monger?
Could they not just ignore him? Or laugh at him?

i would think it is kind of hard to ignore a king, especially when one wields incredible power both emotionally and physically

Making the effort or murder, witch one to do?

Lets ask Mahatma Gandhi. He brought down a government without killing,
but when he was in-turn killed his government continued.

But it is unlikely that veterans who had just fought a battle would think of a non-violent solution. They have weapons in there hands and a target who is a problem. Force-of-habit would lead them to murder, it is just human, and elf, nature.

I guess when one sees or believes there is no alternative they do drastic things. They stop thinking. unfortunately we only saw 6 pages of Ganadons story and his betrayal by his own kind, I have a feeling by the time the tale is told in full, we will have a better understanding of what really happened and what the full consequences would be for everyone's actions here. I do believe that no one is truly innocent and yet all were the victims of a very powerful force that they did not understand.

I have really enjoyed reading everyone's thoughts about this whole incident of the past that will entirely shape a young boys future.

im liking this comic, keep up the good work!

What I'd like to know is what other option they would have had.

Oh, that's an easy question to answer. Just elect a Congress (or Parliament) to help the king run the land, and suddenly it will take years just to get a decision made to do anything. The king would still have been mad, but unable to act on it.

Nice in theory, but I don't think adding more corrupt elements will help a king corrupted by the forces of darkness and rage.

Been in the Corporate world lately? If you want to bog down ANY project, just assign a committee to take charge of it. What are Congress and Parliament, but the ultimate committees?

Whether well-intentioned or corrupt, committees always tend to impede accomplisment.

I think we forget monarchy is based on one individual that rules. They literally can control the outcome of their people. That person might have advisers and friends, yet they still wield with their own individual will. History itself shows how one individual can shape a policy or emotional will of a people, whipping them into a frenzy. As we see Ganadon, it seems his advisers were tired of a war that must have been going on for many years and finally decided a coup was needed to stop the violence…. or maybe they had other reasons. What I do know is one at least regretted the action.

Reminds me of what happened to Julius Caesar.

I think there could have been other options.