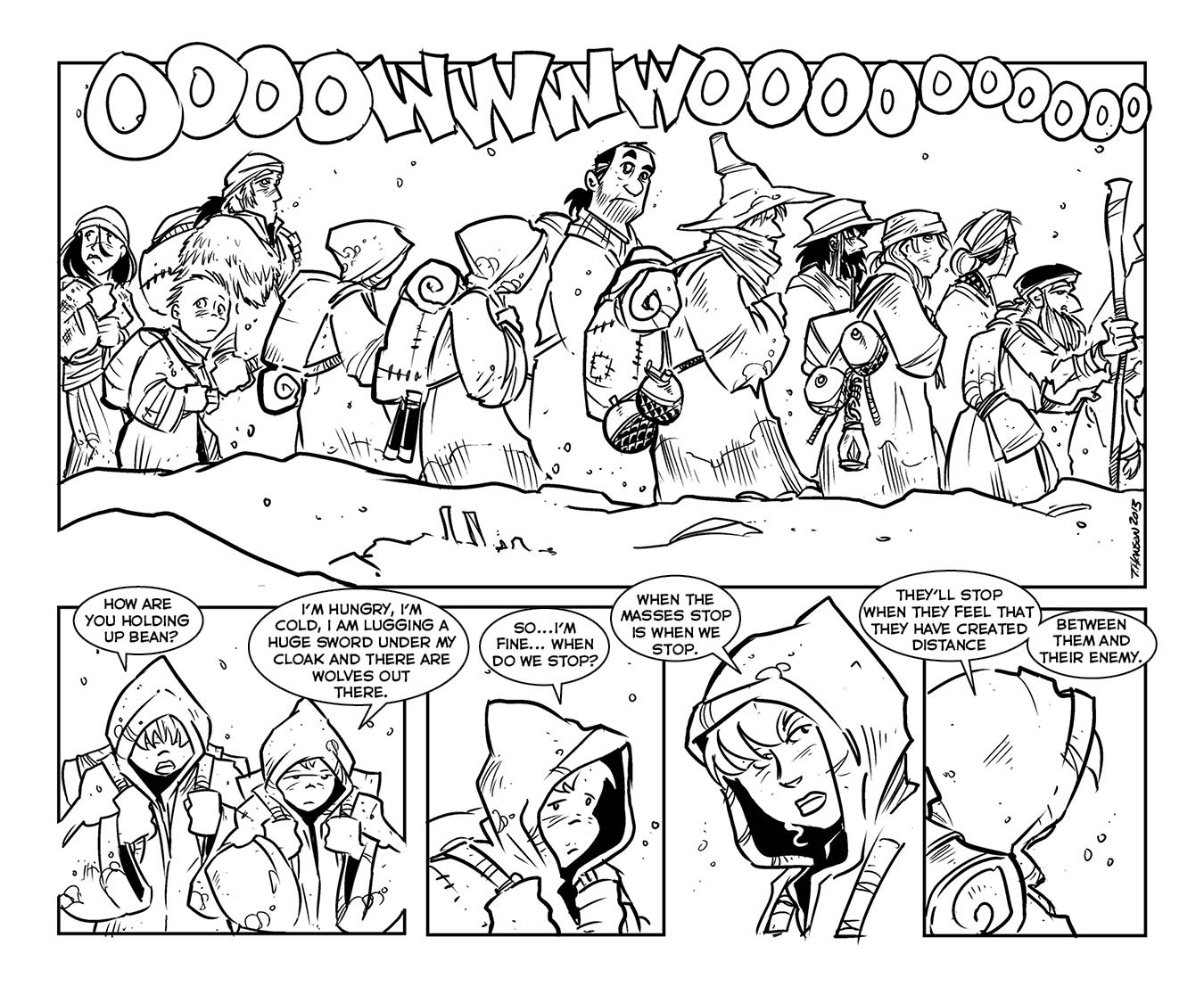 Just got back from the amazing comic con in phoenix- had a nice time though i lost my voice sat at 10 am. Not good when you are expected to talk at a convention. I will be posting my write up soon of the show.

Love this comic; thanks for your dedication to it and to the update schedule. I was in almost at the beginning, and never left.

Now. . .. I'm sure your story and script are already written . . . I'm wondering if you can find a way to not demonize wolves here? I know it's the comics and stuff, and some themes are canon, but I'd love to see wolves, just once, shown for the awesome creatures and the really low-level threat they actually are. They're facing extinction in a lot of places precisely because of attitudes such as you show here. These folks in this panel have more to fear from the weather and starvation than they do from the wolves. As the saying goes, "you could look it up".

Soap box relinquished. :-)) Carry on with your awesome amazing and extraordinary story. Thanks.

i so glad you love the story… now to your concerns-

when i wrote this i wrote this with research-. I wanted to make sure what I wrote and drew was accurate and not demonize anyone. When talking with several people in the military who witnessed and listened to the stories of refugees one of the realistic fears was the animals, the scavengers…. not so much for the living, but what would happen to those too sick, or the dead that fell by the wayside. They fed the scavengers, it's not a pleasant thought and it did not demonize any creature, but just portrayed a realistic characteristic of animals near the point of starvation and the possible food source.

Part of this is also based on the fears of my own ancestors who crossed the plains and lost loved ones. Their biggest fear was that the bodies of their child who died would be torn about by wolves, who were known to dig up graves. So he stayed behind to bury his child and dig a deep enough grave so it would not be molested. He had to do it alone- because they group they were traveling with could not wait, for fear of other dangers.

So this scenario is a very accurate portrayal of wolves and their habits. Yet is also an accurate portrayal of refugees and their thoughts, concerns and fears. Wolves are a very fierce beautiful and dangerous animal. They are not dogs – they are wolves. and they play a huge part in the feat of a refugee, just as lions and hyenas played in the minds of african refugees.

The point is they are not demonized at all- they are being portrayed as they actually would be… hungry animals, waiting for food to be dropped on the trail. Its not pretty, its very real and something we have never had to experiences, but others have.

great response trav. I hope I never have to deal with it either but when I hear people say coyotes won't and don't attack people I cringe. I has been recorded and anything hungry enough and understanding enough that is has an advantage will take that advantage.

yup – it's part of nature- nature can be very scary at times…. now tomorrows update is the one that gets me the most.

Agreed; great response. I greatly admire your attitude and decency in dealing with us readers; thank you. My first reading of it was as a suggestion that a large group of humans on the march risked being attacked by wolves, which is just not so. But there are other issues at play, and I appreciate you pointing them out. And yes, those fears would be very real at least, no matter how accurate.

However, I stand by my statement that the wolves are among the least of the things that these folks need be concerned with. That goes for coyotes too. I've woken in the morning to find coyote, and even mountain lion, tracks all around my sleeping bag, and have never been touched (which is not to say that they're not still wild predator animals, who need to be respected). And while wolves have indeed been demonized way beyond their actual danger. It's not necessary for you to talk about that here though; you're telling a story and showing an experience of some people. I get that, and I'm good with it. :-))

As a matter of fact, I'm good with just about everything you do here. This comic has been a great ride. Thanks for putting it out there for us.

no worries. There is one more thing that i think is an important element here. There are no conservations or programs nor are these creatures endangered and are high on the predator list. They hunt. This story is set in a time period were the world is rough, wild, free and very dangerous. The goal is to show that these dangers exist, are real and yet not force them. I want it to be natural. Hence the howl in wild, with the masses hearing it across the plains would bring that reality of danger much closer to their minds. Especially since the tracks of these people would be followed by many scavengers of this world- hence the birds above.

Yet if i was writing a story- that dealt with today's world and today's experiences and emotions I might tackle the experience a little different:)

thanks for the comments and your right were in a good place.