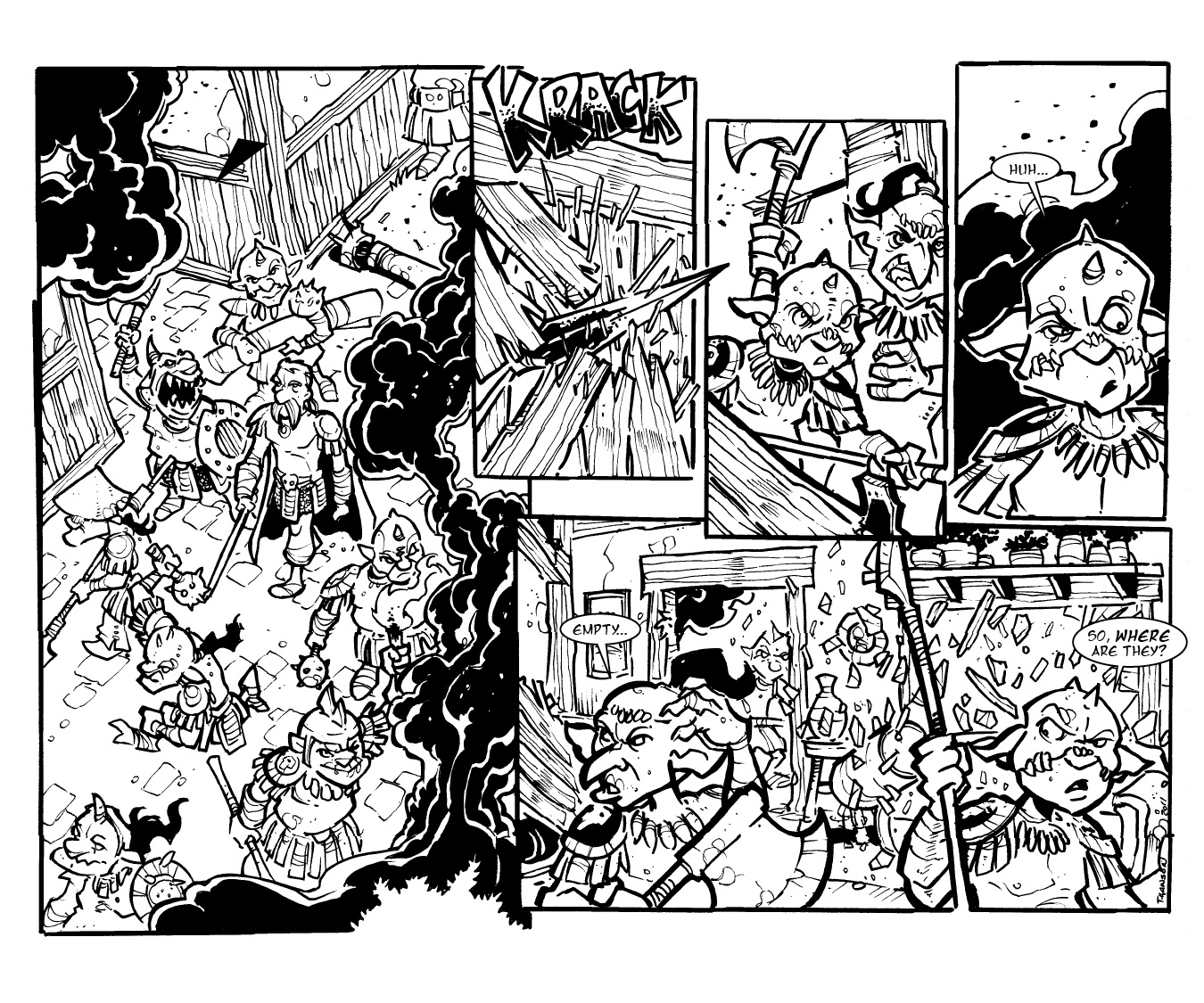 well guys- i am at abq comic expo- and this is day 1. It has a nice vibe so far, lets see if it pans out. Looking forward to dinner with my cousin and his family as well. I’ll post more about the trip later.

Happy goblins get to sack a town!! 😀 I have named these six from left to right Vakna, Gaveen, Nyarb, Yozo, Tork, and Drez. Vakna looks like he just gave himself a head wound while swinging his axe and Yozo looks distinctly mental with his intense beard and brows!

I also met you at the convention yesterday! After I got home (with Forest Watcher and lava dragon sketch!) I looked up your website and read through the whole webcomic! Definitely going to keep up with it, I love it. The lizards and little creatures and tiny houses hidden throughout the backgrounds I find especially awesome, but the whole thing is great!

i am so glad you enjoyed the webcomic as well. It was a pleasure to meet you as well

So I met you yesterday at the Alb. Comic convention. I drove back to Socorro last night and this morning I read The Bean #1…and #2…and #3-#7. It was awesome. I loved the art and the story was incredible. When I bought them I was definitely not expecting a wonderful story with great characters. I can't wait to see #8 and where the story is going to go! Thank you so much for the great work.

comic love appreciates and grateful for. I am so glad i was able to surprise you:) and 8 will be on it's way to press in the next few weeks

Ambush right now would be dumb. There is a large invading force in your town. They are there and ready for a fight, armed and armored. You don't know their strength, units, capabilities or intentions. I suspect they never intended to occupy your town, but to instead decimate your population, loot, pillage and burn your town. This would have instilled fear in others. Ideally they would try to sack successive population areas capturing some resources in each location, and destroying the rest to prevent you form using them.

You have recently been told of their immanent approach and have escaped to safety taking everything useable you can with you. This denies the invaders those better resources, saves your population, allows you to alert other better equipped areas surrounding of the threat. The time to counter attack is when the invading army isn't suspecting you, preferably when they are tired and wont make as many good decisions. The best is to do to them what they were going to do with you and try to disappear small outlying groups without a trace, or in such a horrendous fashion that others will fear to follow.

This is war in the middle ages. Tactics are different because weapons and fights for the most part are individual-personal. News travels slowly though many people and is distorted in the process.

As an aside I place the level of tech to be pre-gunpowder for the most part. Crossbows and long bows the primary ranged weapon, javalins and spears next in range. Swords, pitchforks and other farm utensils as personal weapons. Magic is in use but attacks can only truly be generated by select practitioners. Gunpowder and related technologies and their relatively easy production drastically revised tactics

heh.. Where are they? I was right, Fencer got here first.

Of course the question is, have they simply fled (sensible) or are they in ambush (sensible and brave)?