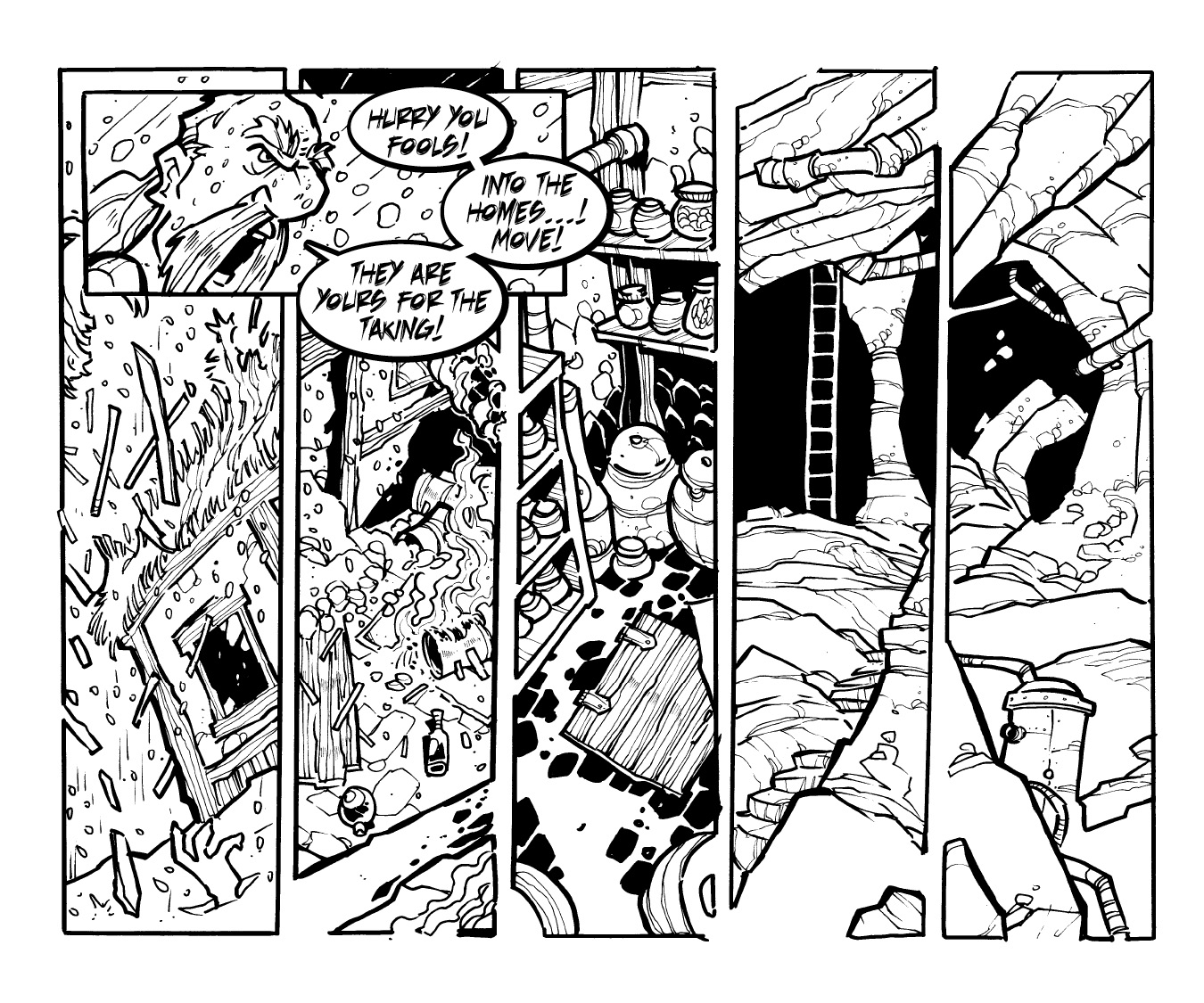 Today is the day that issue 8 goes to the printer. I am really excited about this. I am also starting the covers to the Bean Volume 1. I love the fact that there is still life in my story after all these years.

So let’s make it a question day… Anything you want about the story- Though i might not answer directly in some cases, I will try to answer everything else. What are some things you are looking forward to the future about:)

Fencer made it because the town is empty. I'm working under the impression that Siv made it because he had a shorter distance to go and he started earlier. Papa Fencer went in a different direction, so I suspect that he will make it as well. The storm will help these people escape because it is pinning the goblins main force down in the town. I worry that they may find the trap door in the cellar pictured in panel 4 if they are inside too long though.

I would like to know more about Qwen (Mama Faerie) and her husband. Is he the father of all those little winged creatures, and if so, why don't they resemble their parents more? This couple reminds me a lot of Tom Bombadil and Goldberry; I'd like to know more of their story. Also, I'm really wondering about Groggle. Where did he wander off to? And what are Siv and Ravna up to? And will Fencer and his dad make it out alive? So many things to look forward to!

Your art and the story are both brilliant. I surely will be interested in buying your stuff on books later on!

The old, crumbled underground empire fascinates me; the grand old world, I'd like to hear more on its history.

– a fan from Oulu, Finland (also bothered that it claims that my full name is too long for this comment section :D)

Mmm, I know. I am fortunate enough to not have any ÅÖÄ in my name or a very long one. Double names and long lastnames are a no no 🙂

[question] The old, crumbled underground empire fascinates me; the grand old world, I'd like to hear more on its history.

[answer] I will be giving aspects of it's history in the next few issues. 10 and 11 i think…. yet I will tell you a few things about it. There are ruins of several different empires underground. The most recent were the earth dwellers and the redrock trolls. There are also a few civilizations before that. The underground runs all over darkleaf, it is like a giant ant hill at times. Some of the areas are sturdy, while others are in ruins. Our story will focus on current deceased empires:) The world underground though is alive and strong, it's life fueled by the crystals that are fused in the rocks and some of the other old world technology that still works. There are even huge forests in areas. With thermal heat and the powerful light of many of the crystals life flurishes in its own way.

What we do know though about the old civilization is that the red rock trolls were eradicated (see issues 2 to 5) which talks a little about this (or the the first 150 pages or so). The devastation was so quick that many barely had time to flee. Something happened though that also put a fear in their attackers that still exists today. Hence why the goblins choose not to go into the underground of the forest.