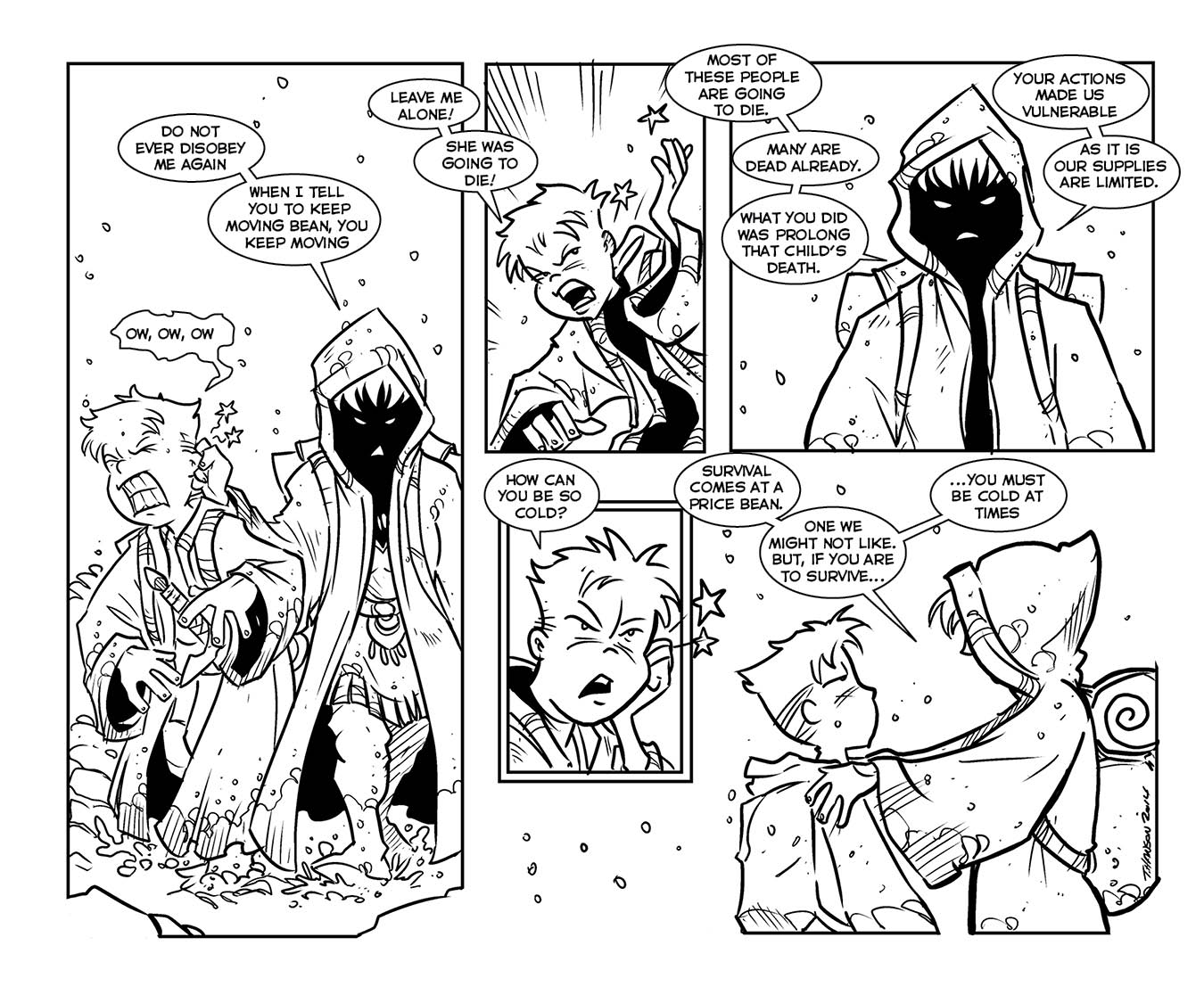 Saw the lego movie this weekend- all i can say was fantastic. It captured the way kids play as well as not dumbing it down. Loved it though i will say if they a made a movie just about batman- i would be all over it. Well worth watching.

Heh, Otter looks MAD AS HELL, and she ain’t going to take any more of it! 😛

I feel for Bean here (really like the expression in the second panel by the way, he could TOTALLY be an old-school punk rock star there! “GOD SAVE THE BEAN!!!! I mean it MAAAAAAAN!!!!” Ahem…), but she’s right. He’ll have to learn if he wants to survive it comes with a cost, and if he wants to be honorable no matter what, well that’s the most expensive choice of all. The safest route is not the nicest, and in a harsh world will never be.

His heart is in the right place though, but at this juncture it might just get them in serious trouble if he’s not careful. A familiar theme in some of the anime I’ve watched recently, but you handle it a LOT better than, say, Valvrave. In Valvrave I ended up hating the main character who was only truly likeable at the VERY start and VERY end of the series, with way too much cowardly indecision/inability to communicate like an intelligent person in-between. Here though I find Bean just gets more interesting as we get to know him, the little mannerisms, the brazen heart, and best of all, his shameless honesty. I really like that about him, it’s almost as if he doesn’t know HOW to lie, something I find really cool. I have a feeling Otter may try to teach him though. 😛

And about the pages, that’s impressive stuff, but what’s really impressive is it doesn’t feel like I’ve read that many pages here at all. The true mark of a good storyteller. 😉

Seconded on all the praise. Especially the characterization of Otter as a strict *teacher* not merely a guide or protector. She has to keep him alive, but more than that, teach him how to be … aloof? Is that the right word? Focused may be better. Focused on the bigger picture rather than being caught up in the minutiae of saving every lost soul he encounters.

it's a tough lesson without a real wrong or right answer. i want otter to feel real and not forced- but bean needs to feel the same way- I feel for both of them actually.

Interesting use of dark shadow for Otter's visage in those two panels. that's new.

Wow! I did not catch that until reading it just now. Yes, excellent. A dark visage for a bleak lesson. A real hero is not all purity and light; he may wish to be, but pure good without a shadow of darkness is powerless. Every good reader knows that 🙂 (in this reader's humble opinion!) ……

I caught up on the last 30 odd pages this morning. I just love this story! I especially love this particular incident and what it reveals about Otter's character. She is a little cold, yet her cold shell doesn't feel forced, like it can in some stories, if that makes any sense. Every character you have introduced has felt deep, with his or her own history, personality, worldview, and ideals. I am excited to see what you do with Otter. Since the moment you introduced her, I have felt some deep, deep foreshadowing going on, and I am excitedly anticipating her continued role in this story.

Is it real worth the fight to keep on living if you can't live with the person you've become? Winning at all costs is not always winning.

interesting question… are we talking winning or survival? Having never been in this situation it is easy to assume how one would react. I find that here opinion is spot on – as a warrior and seasoned veteran – trying to keep a young boy alive in some harsh circumstances.

Otter, you don´t understand the true price of survival is risking yourself to save others because their survival is more valuable than your own. Counting others as greater than oneself always lesds to longer survival. Without it humanity and the rest of the world would have long since collapsed into a Black hole. As it is said truth is stranger.

are you sure she doesn't understand about survival? just asking- I agree with what you said… I just think that there is more to this section than what is being looked at.

Understanding and knowing aren´t always the same thing. Bean is on a path of knowing Otter is merely thinking she understands. For the sake of openess it reminded me of a Sundayschool story about two travelers and one couldn´t go on and was carried by another. Both survived but others who mocked him for carrying the weak ended up frozen.

actually- bean is acting emotionally not rationally… He does not have the experience that the otter has… Otter does things for a reason and there is logic to her reason. She is a soldier not a civilian. Her past might have clues to why she acts the way she does. Bean doesn't have the exp. he's never dealt with refugees… nor war. Not every kind choice or deed has positive consequences in war.

i agree with the act of kindness being important- and i understand where you are coming from… but there is a lot of truth to the comments of both characters.

i wouldn't write her off yet. i think her point of view is valid, based on her experience and history.

He's going to hate me, but I don't see it. Just a sympathetic person towards others in plight. Can't say that about Mr. pot smoking, cop kicking, tp papering cdn pop star.

Oh, and they did make a batman lego movie.

🙂 really they made a batman lego movie ?

All around Bean are people trying to push him toward his heroic destiny, if needs be at the expense of his heroic nature.

and today – you get to see bean actually question it…

OK. You're going to hate me for this but Bean looks like Justin Bieber in these frames… Sadly once you see it you can nay un-see it.

Don't be too sad! I don't think Bean looks like Justin Bieber!

…But then, I don't actually remember what Justin Bieber looks like…

(Also, for me selecting text in this textbox still makes it look like it disappears since the text turns white and there's no background highlight)

Dangit, John, now I see it too. THIS IS ALL YOUR FAULT.