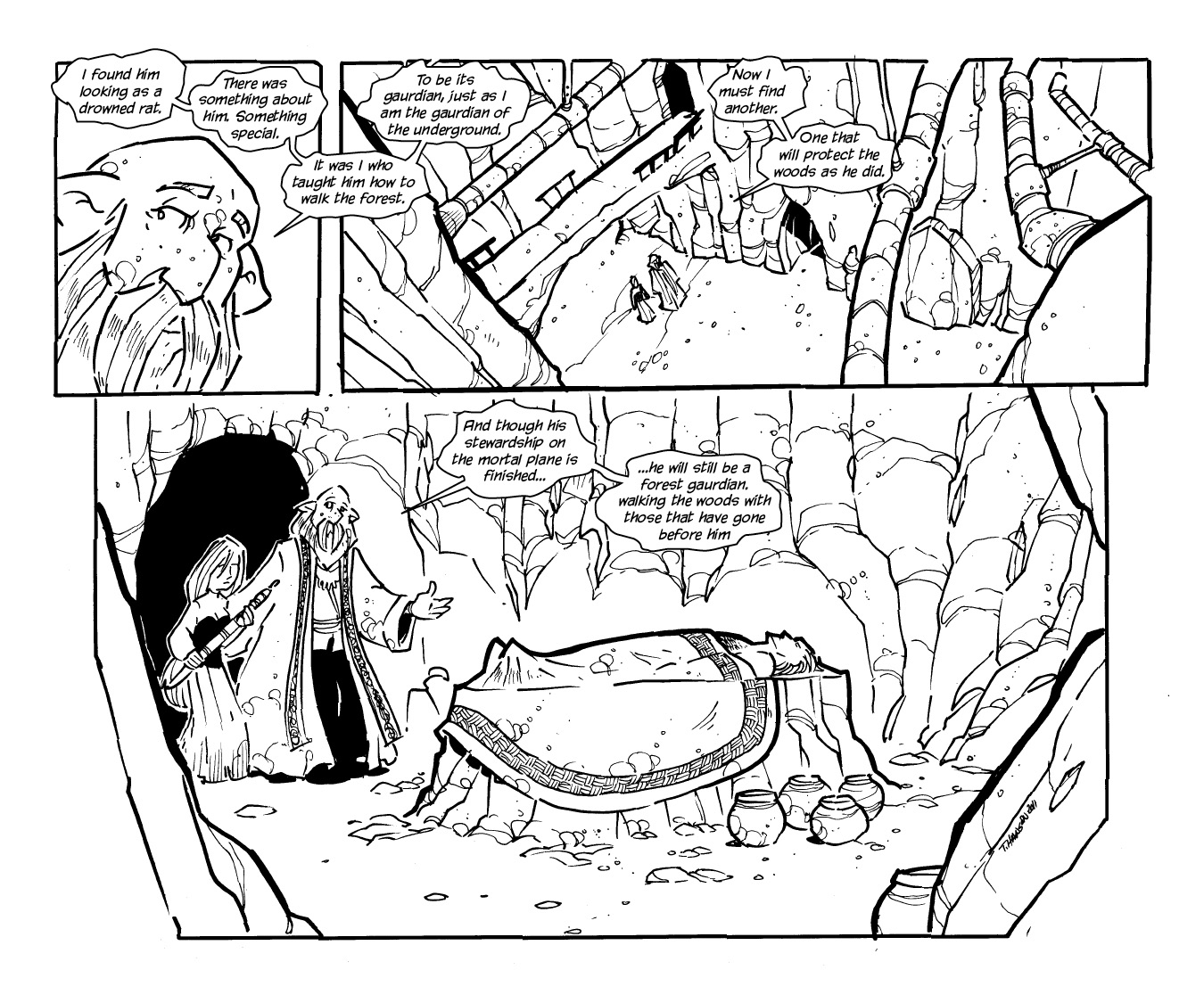 I hope you take a moment and look at some of the other recent posts. I have been trying to add more to the blog. Also I should be getting the proofs to vol 2 today.

if you need a shoulder you can put your head on mine for a moment. I know how you feel.

Oh, I cringed when I saw Siv's body right there…I'm still mourning the loss of a great character…

Me too….. But Trav has assured us that Siv is not completely out of the story. I'm going to hold him to that. 🙂

One thing that makes a character strong (alive or dead) is not what they are at the moment, but what others remember of them and the stories they continue to tell about them. It encases their immortality.

I look at siv very much the same way. He has an incredible story to be told. I just wont tell like bean's and ravna's story. Even gort and groggle have a story about them

i am sorry- things happen and i needed it to be realistic to a degree. Yet the forest walker will live on and become almost legend… among the children of the broken moon

No, Trav, don't apologize. Firstly, it's pretty bold to let one of your main characters be killed–there are an awful lot of storytellers who can't bring themselves to do it, even if it would serve the story well.

Secondly, I can already see that Siv's death isn't off in the other pitfall that sometimes pops up in stories, where suddenly one of the characters die senselessly, and the reader's all, "Wait, what? Why???" It's already a major plot point here.

Thirdly, the fact that we're all so torn up about Siv's death just goes to show that you've done well in writing his character–we actually CARE about him, and care a lot!

And finally, it is reassuring to know that Siv's part in the tale isn't done yet! ^.^

i wont apologize than:)

Of course I know that it *must* happen (being a writer myself, I completely understand when and why certain characters must die.)

I wake up each Thursday with the promise of a new Bean. Today, that enthusiasm was cut short by the final proof that Siv will not be coming back. At least in a physical form. I like lithicbee's idea! Use the Force, Bean! Just don't say you have the high ground….

you know his story is not done:) just letting you know:)

I know! I just couldn't hold back the tide of grief that arose when I saw his body.

I felt the same way when I created this scene- it was hard for me, yet it strengthened the story in many ways for me. In some ways I did not expect either, which is good.

The true vision of it really comes out – not by reading update to update, but from beginning to end. (Hence the need for the books).

I am sorry for siv and ravna's loss as well.

All this time I had been hoping that maybe he wasn't really gone, but this seems to cinch it. Farewell Siv. You will be missed.

We may see him again as a forest guardian, at least. Use the Force, Bean?

Travis, maybe I haven't had enough coffee yet this morning to see it: how does one get to your blog?

just go to the bean leaf press homepage…. you can click the header at the top- comic is at the top and just scroll down

Thanks. Okay, I also get the blog posts via Facebook I think. Just wanted to make sure it wasn't something I was missing.

I know it is one more thing, but any chance of The Bean on Google+ so it can be shared more easily there? I know there is an extension for Google Chrome that allows you to simultaneously post to FB and G+, if that makes it easier.

nope i try to keep it all in one place

as for the double posting , i will have to check that out sounds pretty cool- i am not usually on google +

yet his story will go on….there is still much to tell

"gaurdian" should be guardian, no? Panel 2, two occurences; panel 3, one occurence.

sigh…. another fix before press time:) well at least i can do these in may