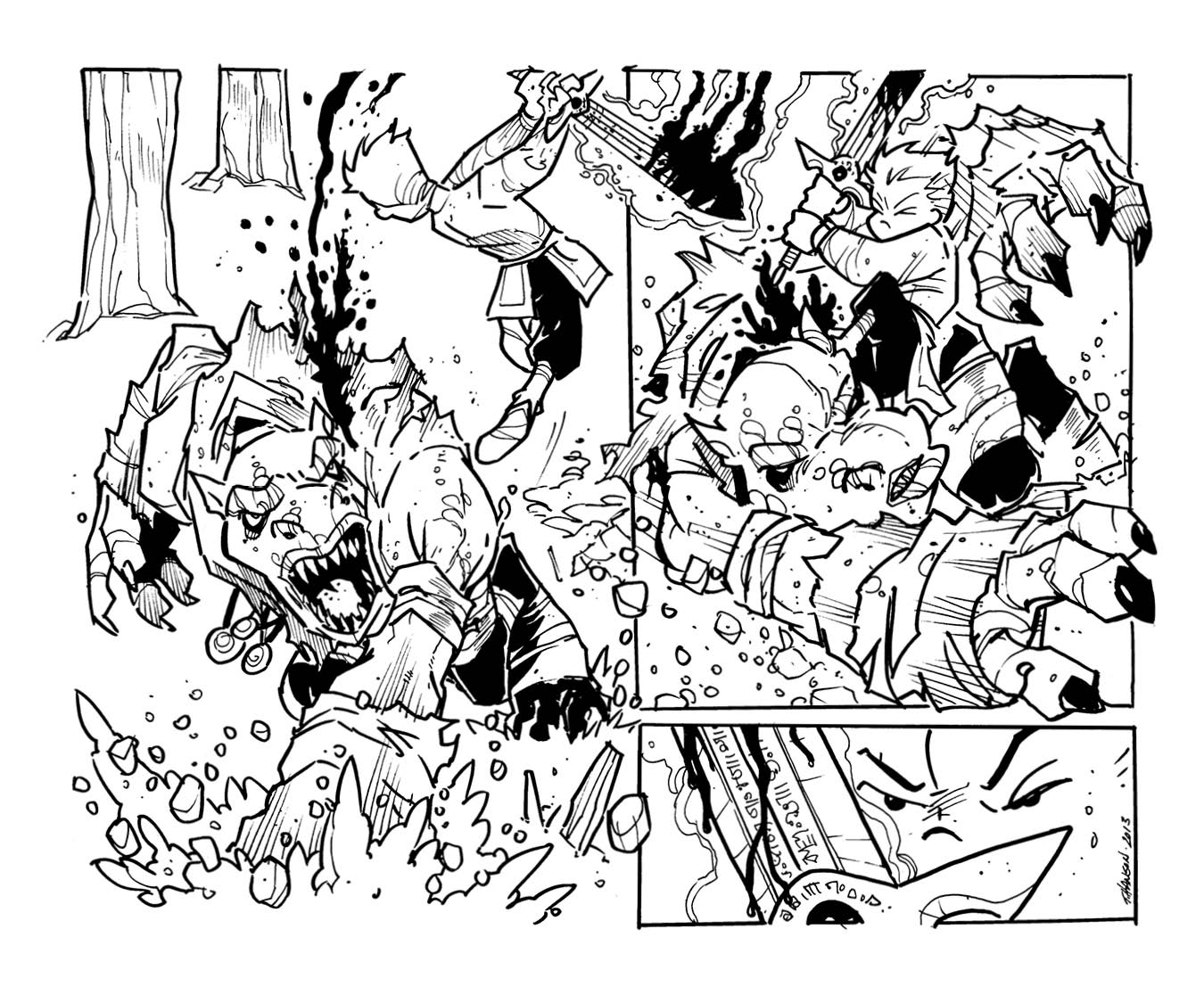 Why hello- First of Happy fourth!
New update today – as well as a bunch of other cool changes to the site. First off I have a complete who’s who’s guide for the comic here http://www.beanleafpress.com/?comic=the-people-of-the-broken-moon-cast-page . Also if you notice on the side there are faces of who’s in todays update. You can see them through the whole comic now. Hover over and you will get some background detail on that person. Also there are location spots and chapter spots.

Last but not least is the chapter section. Took a bit to index the entire comic but now it’s broken into chapters. This should make it a little easier to find your place or find an area to start.

Argh, so painful! I really wish the Gren'nels were good guys.

When the diminutive dragonslayer said he was assigning Bean a traveling companion, I had hope it would be a Gren'nel.

Trav. I really appreciate the character guide you’ve added. You have created so many interesting characters, and with the pace of a web comic, it can be difficult to keep up. I hope you can add this to the next printed volume, or perhaps make a page, same size as the books, as a Kickstarter incentive. You are in and always will be in my unranked Top 10.

got to get it back up

I doubt if the situation would have improved had not Bean jumped the grenel (assuming he has just killed the creature very quickly with Samurai-like precision.) At best he gains a little more respect from the Elf Lady. If he had allowed the grenel to continue, or there was some kind of stalemate, that would have been potentially very bad: the creature's psychic powers- who knows what the thing would have been able to do? I think they had to dispatch the beast quickly for their own survival, before it had a chance to report what it had found!
But the problem now is with Old Ben, who maybe thinks this knowledge might be worth something of value to someone, or maybe he can bargain for his silence about what he's seen.

a lot to think about.

Love the who’s who, and the side panel with the characters and background info, so very helpful.

Yeah, that’s a really neat feature. Something I wish that all webcomics would have, as it really takes advantage of the possibilities of the web, while at the same time mitigating one of the drawbacks of more time passing between reading each part of a story. (I didn’t remember what a Grenel was, or that they had been sent to track the sword.)

Yup, I was just trying to remember the last time I saw a comic with that feature only to find that, nope, not one of them actually has it! Must have been a lot of work putting that together but it looks (and works) excellent now that it's there. I'd even call it gnarly!!! 😛

Way to not follow orders Bean. SIGH… I wanted to see the Elf Lady fight, not a sword controlled power transfer. Though nice evil face over the crossguard. Hope we dont loose another to the sword with history repeating itself. At this rate if Bean is ever disarmed he wont know how to fight. Since the sword keeps taking control.

makes for interesting thoughts- the sword taking control of someone who doesnt really know how to wield it.